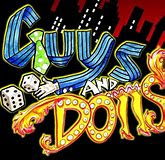 Enjoy a time of romantic comedy and timeless music when Blackfoot High School presents their musical production of “Guys and Dolls.” Directed by BHS drama teacher, Sharon Hoge, this play will have BHS students shine in this 1950 classic award-winning musical.

Hailed as the perfect musical comedy, this show tells the story of luck and love under the bright lights of Broadway. Guys and Dolls ran for 1200 performances after it opened on Broadway in 1950. It received nearly unanimous positive reviews from critics and won a bevy of awards, including Tony Awards, Drama Desks, and Oliviers.

The story involves gambler Nathan Detroit who tries to find the cash to set up the biggest crap game in town while authorities breathe down his neck. Problems with his fiance, Adelaide, complicate his life so Nathan turns to fellow gambler, Sky Masterson, for a loan. Sky then ends up chasing the straight-laced mission sergeant, Sarah Brown, as a result. Humor and great music weave a story for all ages to enjoy.