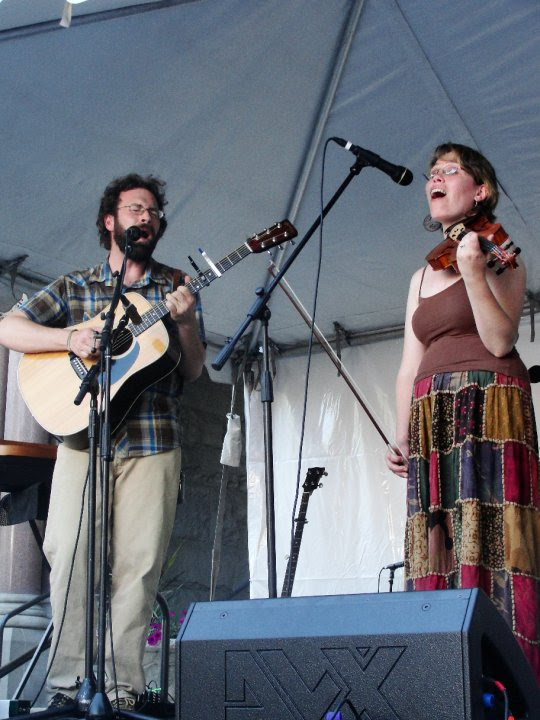 Audience members will have a unique experience enjoying a Backstage Event at the Blackfoot Performing Arts Center with the famed bluegrass group Otter Creek. In a Backstage Event, the audience sits on the stage surrounding the performers in an intimate concert seating arrangement. This concert arrangement has proven to be very popular with both performers and audience members alike.
With 10 instruments between them and 53 strings to tune, Otter Creek (Peter & Mary Danzig) burst onto the national folk scene in 2012 with back-to-back hit albums on the Folk Charts. In the 4 years since the husband and wife duo began playing together, Otter Creek has won multiple awards for their virtuosic instrumentals, adept songwriting, and visionary arrangements of traditional and original tunes. Most recently Peter won the Utah State Fiddle Championship (June 2013). Mary previously won the Fiddle Championship in 2011. With Peter’s previous wins in banjo and mandolin people have joked that a concert with them is like a two for one deal where listeners get four Utah State instrument champions for the price of two. They have opened for The Claire Lynch Band, and have performed with many acclaimed songwriters including Peter Mayer, Kate MacLeod, and Alicia McGovern. They have drawn praise from around the country leading one critic to describe them as “a duo that is both a technical marvel and tastefully perfect.” (Rootsworld Magazine)
Tickets for the Otter Creek concert are $10 and are available at blackfootpac.com, 208-317-5508, or at the door the night of the concert.
Listen to Otter Creek here.