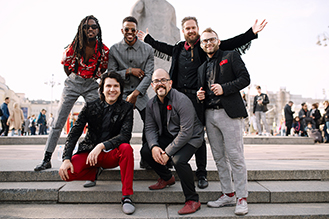 One of the busiest touring a cappella ensembles in the country, from coast to coast Six Appeal has become known for their vivid musical style, unmatched energy, and playful charm. Their far-reaching repertoire spans a multitude of decades and includes pop, country, classic rock, jazz, R&B, and much more. Since 2015 Six Appeal has performed over 600 concerts in the US alone. They recently competed with top groups around the world in the 2018 Moscow Spring A Cappella Competition and were awarded the $100,000 grand prize.
To learn more about Six Appeal Vocal Band, visit their website.